The ovaries are two small almond shaped organs that are part of the female reproductive system. Ovarian cancer is a general term used to describe a cancerous (malignant) tumor starting in one or both ovaries.

Ovarian Cancer is the fifth leading cause of death among women in the United States and is the most deadly of the gynecologic cancers.

It is estimated that in 2021, approximately 21,750 women will be diagnosed with ovarian cancer and about 13,940 will die from the disease.

Ovarian Cancer is not an uncommon disease, occurring in 1 of every 78 women.

When ovarian cancer is detected early, before it has spread beyond the ovaries, more than 90% of women will survive longer than five years. Only 15% of women are diagnosed in the early stages.

Currently, 50% of women diagnosed with ovarian cancer die from the disease within five years. When diagnosed in advanced stages, the chance of five-year survival is 48%.

Ovarian cancer is often difficult to diagnose because symptoms may be subtle, are easily confused with other diseases, and because there is no single reliable easy-to-administer screening tool.

There are several types of ovarian cancers:

All these different types of ovarian cancer behave differently and are treated differently. Within these types, there are different subtypes of tumors.

Sandy Rollman was a fighter ...

in the truest sense of the word. It would have been a mistake for us to just give up. 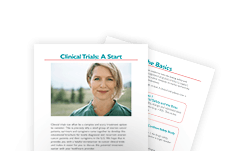